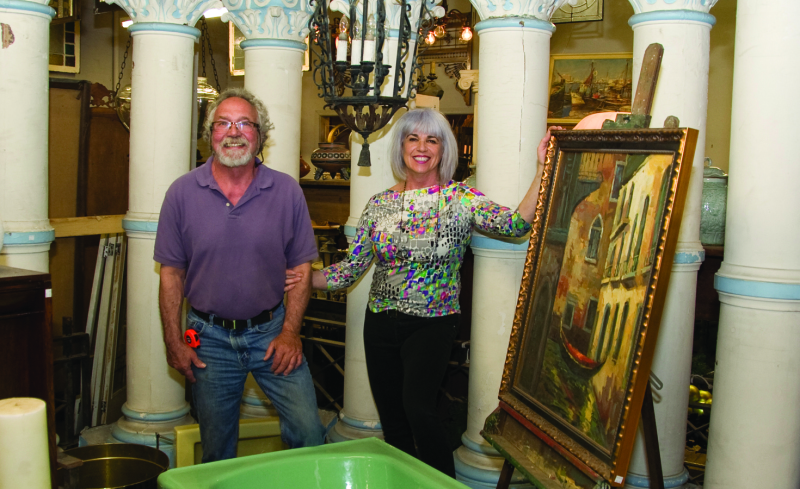 Village residents Bob and Jane Cairl have been salvaging and preserving a variety of artifacts from area homes for more than 20 years. Their business, Architectural Artifacts, sells an array of architectural antiques, everything from fireplaces to colored sinks, brass doorknobs to marble statues, and vintage lamps to wooden doors, among other things.

The Cairls got the idea for Architectural Artifacts when they bought a home in Ottawa Hills in 1992. They had a difficult time finding and purchasing authentic period items for their home. When they found they had leftover items, they placed an ad in the newspaper, in an effort to sell the surplus. They were surprised at the positive response they received.

"We felt that there was a need and a demand, and we experienced it ourselves in regard to our home in the Village," Bob said.

After purchasing a building in Toledo's warehouse district in 1994, Architectural Artifacts was born. They acquire most of their products from builders, remodelers or homeowners hoping to sell their unwanted household fixtures, details, and other objects. Their store is brimming with leaded glass windows, antique bathroom fixtures, an array of columns, and a wide variety of doors.

While most of Architectural Artifacts' stock comes from the Toledo area, including Ottawa Hills, the Cairls have gotten things from homes as far away as Alabama, Missouri, and New York.

Over the past 23 years, the Cairls have seen different patterns emerge among homeowners, noticing a correlation between home-buying trends and certain objects' popularity. When the business first began, it sold many objects from the Victorian era, such as clawfoot bathtubs and white pedestal sinks. However, the Cairls say more recently they are seeing many younger homeowners, who are buying less expensive homes, many of which date to the 1920s and 1930s. Because of this, much of the demand has moved away from Victorian era items, and instead towards midcentury items, such as colored bathroom fixtures.

Architectural Artifacts has also sold to a number of well-known customers, including Ralph Lauren, Tommy Hilfiger, and Martha Stewart, in addition to selling to the production companies of various movies and television shows.

One thing that makes Architectural Artifacts unique is it isn't simply a place to buy and sell one-of-a-kind home pieces. It is also a business that wants to make sure customers preserve the architectural heritage of a home.

"We really try to help educate people into what their house was like and what kind of stuff was in it and about being sympathetic to the structure, instead of just gutting out all the stuff," Jane said.

Jane and Bob readily give expert advice to curious homeowners about their house's heritage and the value of the objects contained in it.

"If you have questions about anything, even if you didn't buy it from us, we're a good resource for that," Bob said.

In the future, the duo would like to find someone to carry on their business.

"We'd really like to see it go on as a viable business, because we think there's a real need," Jane said. The Cairls also believe having a business such as Architectural Artifacts in downtown Toledo is one step towards achieving the goal of a thriving and prosperous downtown.

Architectural Artifacts is at 20 S. Ontario Street, and is open 10 a.m. to 5 p.m., Tuesday through Saturday.