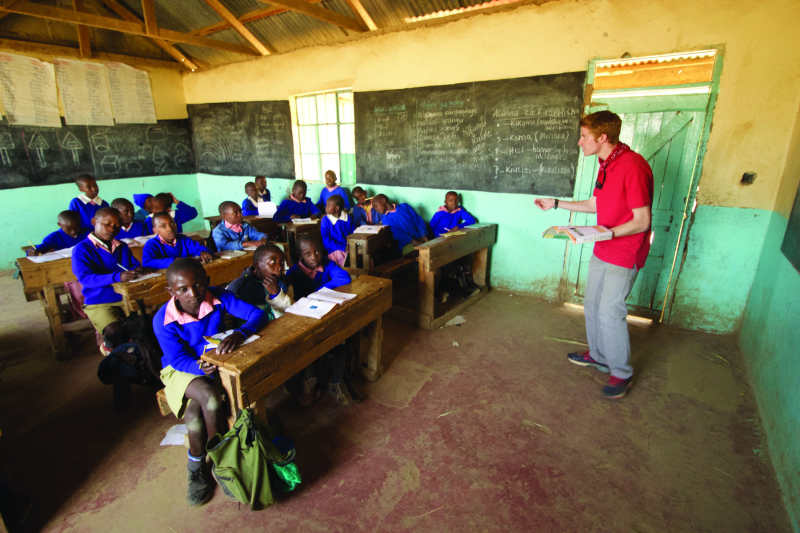 Matt Sherman had a "very enjoyable time" discussing the benefits of a balanced diet with a fourth grade science class at Irigithathi Primary School.

For many high school students, summer is a time for vacations, camps, part time jobs, and, if they are fortunate, travel. This summer eight Ottawa Hills students travelled more than 7,700 miles to Naro Moru, Kenya, to participate in the 2017 the Service Learning in Kenya (SLIK) program at Batian's View Experiential Education Center.

Established 13 years ago by OHHS grad Fred Roberts, SLIK offers American high school students the opportunity to teach, explore, and experience parts of the world many have never before experienced.

At first, the task of teaching young children was daunting to some students.

"It was kind of intimidating at first because when you get to the school, they would just throw you in the classroom and say that you're teaching this in front of about 30 little Kenyan students" says Preston Smith, "but after the first week, you just got used to it and it got a lot easier because they like to learn."

The average school day in Kenya is similar to an American school day.

"The students are supposed to report at 8:15. They have the morning assembly and announcements and things like that," Roberts said. "The classes start at 8:20, go up until 1, and there are a couple short breaks in the middle. Total of eight 35-minute classes and school ends at 3:15."

After school, students engage in various activities until about 4, when the school day is officially over.

While school in Kenya is structured in a manner similar to an American school, the Kenyan children had a different attitude about learning than many of their American counterparts.

"The kids loved to learn," Smith said. "They loved seeing everyone and being around you ... [in America] so many kids don't like going to school as much as [the Kenyan students] do."

"It's totally acceptable to show your enthusiasm for the topics you're learning," added Will Koury. He said his students were so excited to learn that they would yell "Teacher! Teacher! Teacher!" because they wanted very much to be the one who answered his question.

Koury had an especially meaningful experience during his time in Kenya; he and Randall Johnson were able to bring internet to their school, Gitinga Primary School.

"The Kenyan government has an initiative where they're trying to bring computers into their schools for student use, but they didn't provide access to the internet," Koury said. "Randall and I ... [went] into town and bought a modem which would give them internet access, and by using that, we were able to bring internet access to all their computers."

Roberts was delighted to be there to see it.

"Bringing the internet into this little school, that was pretty cool. Both of those guys were pretty proud of that," Roberts said. "I was there when they did it and I was like, 'You know, this is right up there with the top five things I've witnessed in Kenya.'"

It was an important success for Koury.

"I enjoyed having a different experience," he said. "I also realized that after bringing internet to schools, and then trying to teach the teacher how to use it so they could use it for the students there, made me realize maybe I'd like to have a career in computers."

The trip wasn't all teaching, however. During the latter part of their stay, the group spent four days exploring Mt. Kenya and took a three-day trip to Samburu Game Reserve to see the wildlife. On the weekends, the group hiked, spent time at an orphanage, and even built two new classrooms for a nearby school.

"We try to build a classroom every year," Roberts said. "So for two days, the students were using a pickaxe and shovels and mixing cement and hauling dirt along with about 100 other parents from the school community."

Students were surprised by how drastically different life is for children in Kenya versus in America. For many 14-year-old Americans, an iPhone is a luxury. For the Kenyans they met this summer, access to basic necessities, such as readily available water, electricity, and air conditioning, were luxuries.

"When we went to the orphanage, one of the girls had just turned 14," recalls Preston Smith. "We asked her if she celebrated or did anything for her birthday and she said that she got just a cold shower and that's all she got, but she was just really happy that she had gotten that."

As a birthday gift, Smith and Liz Ponder gave the girl a hair tie and a bracelet, who was grateful for their kind gesture.

"She really loved that. Her eyes lit up and everything and she kept it on her wrist and just kept looking at it. It was just really cute to see how much they appreciate that kind of stuff," Smith said. "The kids there don't depend on the materialistic things. They just are so happy without any of that."

Students felt the trip was an amazing experience.

"It was great," Smith said. "I would go back again next year because I just formed a lot of really good relationships with a bunch of the people who went, and just being with the kids there overall was just a great time."

Roberts loves every minute of the trip and wants his students to experience the world outside of where they live.

"I want to bring as many people together to share an experience where everybody is learning and having fun. The world isn't Ottawa Hills," he says. "It's a big, wide, different place. Keep your eyes open and have a really open mind to everything."