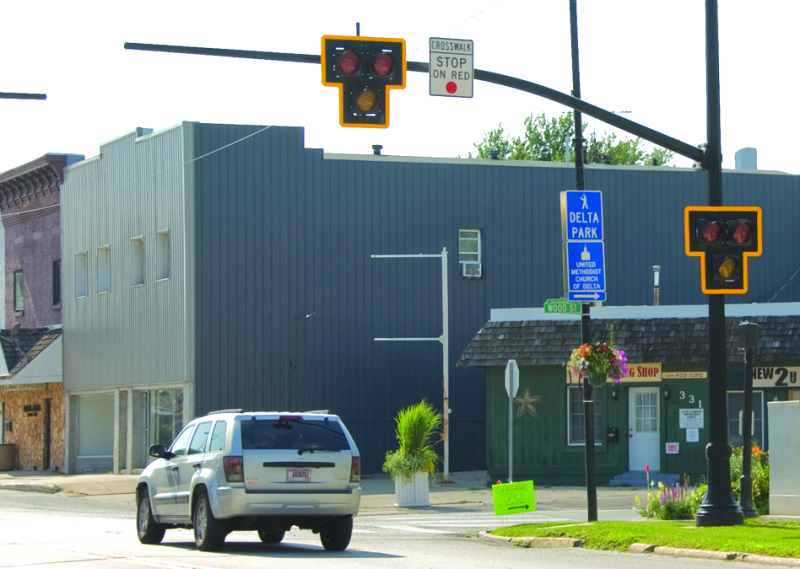 One of the systems being considered is the high intensity activated crosswalk signals.

Based upon complaints from several residents earlier this year, at its July 13 meeting Village Council's Safety Committee discussed a number of options to upgrade the warning lights for a pair of crosswalks on West Bancroft Street.

Both locations, one at Brookside Road, the other at Evergreen Road, currently have traffic signals that allow someone to stop traffic on Bancroft by pressing a button on a pole on either side of the street. When activated, the lights cycle from green to yellow to red, and remain red for 20 seconds, giving a pedestrian enough time to cross the street.

Ottawa Hills Police Chief John Wenzlick told the committee no pedestrians have been struck at either intersection, "but we have heard of some close calls."

One of those close calls was earlier this summer, when 9-year-old Jasper Allred was nearly hit by a car as he went to cross Bancroft at Brookside. He had activated the light cycle, and once the light for Bancroft was red he started to cross the street. His mother, Heather, yelled at the driver, who pulled over to apologize.

For the Allreds, who live on Brookside, south of Bancroft, Bancroft has been "an impenetrable barrier," Allred told the committee. "We live on an island. I would never let the kids walk to school" by themselves, she said.

Chief Wenzlick told the Committee because the traffic lights are always green, changing only when a pedestrian has activated the signal cycle, many motorists become used to the nearly constant green.

Allred herself admitted to being caught off guard by a red light on Bancroft at Brookside.

"Two years ago I ran that red light," she said. "I was horrified."

In addition to adding signage to notify motorists of an upcoming pedestrian crosswalk, Wenzlick discussed a pair of lighting systems that would replace the existing traffic signals.

A combination of signage and rectangular rapid flashing beacons would cost about $15,000 per intersection. This is the system the Village installed within the last year on Indian Road at Pembroke Road.

With this system the yellow LED lights start flashing when a pedestrian pushes a button on either side of Indian, alerting motorists that someone is about to use the crosswalk. Once the 20-second cycle ends, the lights go dark.

"Drivers must yield to a pedestrian in a crosswalk," Chief Wenzlick said.

Another system the chief discussed was a pedestrian hybrid beacon called a high intensity activated crosswalk (HAWK) system. It too is a pedestrian-activated warning system. The HAWK system, which is in use in the village of Delta, in Fulton county, consists of a group of three lights, one yellow and two red. When not in use, all three lights are dark. When triggered, the yellow light starts flashing, then goes steady, and then shuts off as the two red lights illuminate. As the cycle nears an end the red lights start flashing before going dark.

The HAWK system costs around $65,000 per intersection.

Wenzlick is going to secure a quote for the HAWK system and report back to the committee.

In other business, the Committee was told the school zone warning signs and flashers on Indian Road will be relocated this summer, before the start of the school year. Council had already approved expanding the school zone on Indian earlier this year, pushing it 300 feet east and west of the school. The signal near the school driveway will move east, closer to Manchester Road.

The signal near Ashborne Road will be mounted on a new mini cell phone tower that will be installed about 300 feet west, near Bexford Place. The Village has been working with the company that is installing the new tower to ensure the pole is decorative, in a style similar to the streetlights in the Village. The company has also agreed to allow the Village to attach the school zone warning signs and lights to the pole, helping the Village keep "pole clutter" to a minimum.

The six body cameras and associated charging dock will cost $8,000, the cost of which will be covered by $18,000 the department received when it traded in three used cars earlier this year when it was purchasing a new police cruiser. Currently the department is not using body cameras.

"They make sense, and our officers want them," Wenzlick said.

In other business, the committee learned the organizers of the Glass City Marathon are looking into a new route of return for the half marathon, in response to complaints about traffic problems along West Central Avenue and on Bancroft.

The Committee also discussed a request from a resident about closing some or all of the streets in Plat III abutting Secor. Gibbs said he was opposed to closing all of the streets, as that would force more cars onto Manchester and Indian during school drop-off time. He also expressed concerns with how such closures would impact access to the neighborhood to emergency vehicles.

Chief Wenzlick expressed concern with how larger emergency vehicles would navigate the closed streets without being able to turn around.

Councilwoman Kate O'Connell agreed a total closure of each street would not be ideal, but "we should look at doing something along Secor" to improve walk-ability in the neighborhood.